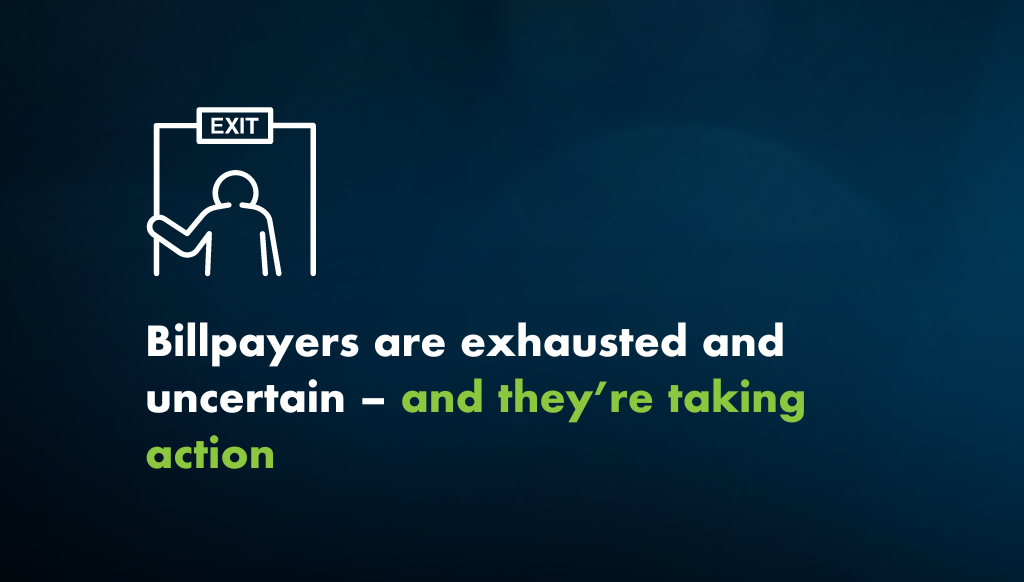 Symend’s 2022 consumer report – based on a survey of billpayers across North America – reveals that over a quarter (26%) have already reduced the number of services and service providers they use. And a further 60% are likely to take this step in the next 12 months.

The report delves into the many drivers of this great shift in billpayer behavior, as it explores what billpayers are experiencing now, and what they expect in the coming year. But one overarching theme emerges: billpayers feel exhausted.

When was the last time you heard someone say they were exhausted? Likely at least once in the last few days. The combined impact of the pandemic, rapid digitalization, global unrest and growing financial pressure is enough to make anyone feel drained.

According to the report, a third (34%) of billpayers feel they have less energy than they did a year ago, and roughly the same proportion (32%) say they have more demands on their time.

Digital fatigue is particularly evident, with 64% of billpayers saying they feel exhausted because of the amount of time they spend in front of a screen. (This is up from 49% from just one year ago.)

This digital fatigue seems to be contributing to another type of exhaustion – decision fatigue. More than half (56%) of billpayers say they feel overwhelmed by minor daily decisions such as where to go, what to buy and what to do.

It’s clear that digital and decision fatigue is having a significant impact on the relationships service providers have with billpayers. (This infographic provides a quick-read snapshot). Alarmingly for these service providers, 59% of billpayers say they’re likely to reduce the number they use in the next 12 months just to make their lives easier.

Financial instability is a growing concern

An inescapable backdrop to this digital and decision fatigue, and the resulting behaviors, is the economic uncertainty being felt across the world.

Our report reveals a staggering 83% of billpayers are experiencing increased stress in at least one area of their lives since the pandemic. But financial uncertainty is by far the most common stress driver – fueled by inflation and the cost-of-living crisis. Compared with 12 months ago, 54% of billpayers have more money worries, 42% are saving less, 32% have less available funds and 25% are relying more on credit.

The report sets out in detail how the decisions of billpayers can be affected both when they lack financial security, and feel uncertain about their financial security based on perceptions of the current state of the economy. The likelihood of making decisions that are in their interests are reduced, and their behavior can be influenced in other unpredictable ways.

This is known as a scarcity mindset.

Non-stop uncertainty is taking its toll

When people don’t know what’s around the corner, they can find it hard to make plans for the future. As mentioned earlier, real or perceived scarcity both have the potential to significantly impact consumer behavior. In fact, perceived scarcity and uncertainty is often more difficult for people to manage, and leads to a sustained scarcity mindset that results in increased fatigue and less effective decision-making.

According to the report, this is particularly acute in younger age groups, with 78% of under 35s saying their perception of future risk or financial uncertainty makes it difficult for them to make effective and quick financial decisions. This compares with 66% of billpayers from all age groups.

Avoidance behavior in billpayers behind on payments

Interestingly, all the behaviors discussed earlier, such as ignoring messages, turning off notifications and deleting apps are more pronounced in customers already behind on their bills. The findings suggest that financial difficulties are leading to avoidance behaviors such as the ostrich effect (the metaphorical act of burying one’s head in the sand).

But some billpayers are planning to take far more decisive action, with 73% of those behind on payments saying they are likely to reduce the number of service providers they use in the next 12 months to save money, compared with 51% of billpayers that are not falling behind.

To prevent disruptions to the effectiveness of your customer engagement strategy, try to anticipate when your customers may be experiencing a scarcity mindset so you can adjust your strategies accordingly.

Service providers might believe exhaustion and non-stop uncertainty are highly complex issues that are experienced on a personal level and out of their control. But their customers don’t see it that way. They’re asking for help and the vast majority (84%) have identified at least one action service providers can take to help them make effective decisions more easily and confidently.

With exhausted and uncertain consumers already taking action, service providers must address their concerns and engage them through personalized support, clear communications and empathetic interactions. It’s the only way to keep those customers in the long-term.

Download our 2022 consumer report, The Great Shift in Billpayer Behavior, to discover more about what’s driving consumer behaviors. Find out what support service providers can offer customers to overcome the impact of exhaustion and uncertainty, and to engage with them more effectively.

TAKE ME TO THE REPORT

Download Symend’s guide on how your organization can improve collections through the power of positive experience.